The past couple of years have been huge for Multi Effects and it’s hard to see how they can get any better, but Boss GT-1000 may have just topped the class.

This NAMM 2018 brings Boss back with a bang with the introduction of their newest and most powerful GT unit ever released, the Boss GT-1000. As you’ve guessed it’s armed with ground breaking technology, and sets a new standard for tone.

Boss have set the bench mark for so long for Multi Effects, namely with their GT series, that have been making waves for musicians since the early 90’s. However, with recent releases, such as the Headrush and the Line 6 Helix, it’s safe to say the bar has been raised once again. 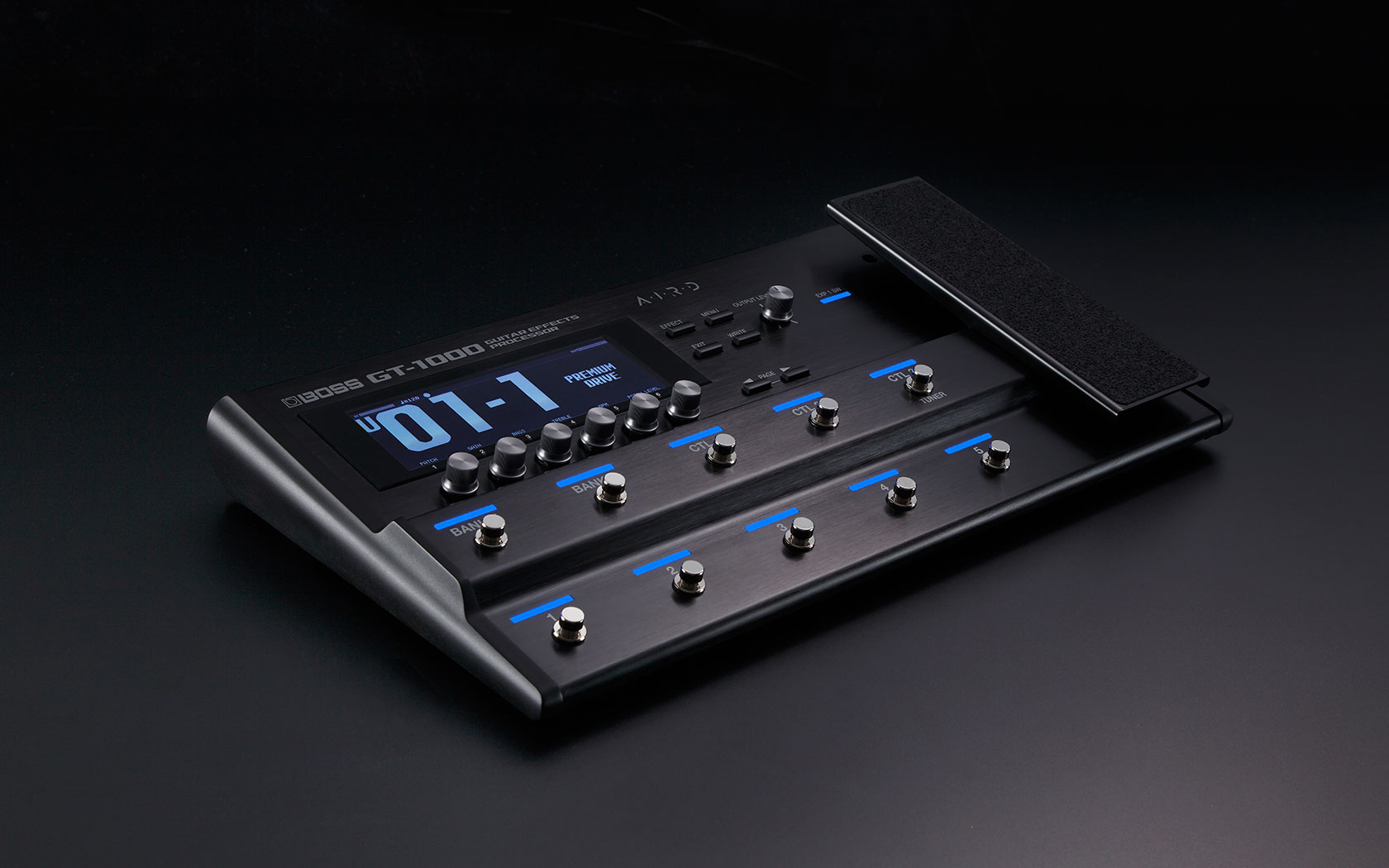 A.I.R.D or Augmented Impulse Response Dynamics technology is the culmination of decades of tonal research paired with an Ultra-fast DSP engine, 32-bit AD/DA, 32-bit Processing and 96 kHz sampling rate, but what does it mean?

Well, it’s technology that is an evolution of their Tube Logic and COSM engines, that are based on emulating the behaviour of an amp as opposed to just sounding like one. This means that A.I.R.D. amplifiers live and breathe like real tube amps, providing inspiring feel and authentic tonal dynamics.

When you consider the extremely high-quality products Boss have released over the past two years, i.e. The 500 series effects pedals, ES-5/ES-8 and MS-3 Switchers, WAZA and MDP pedals and the incredible sounding Katana amps, we almost fear how huge the Boss GT-1000 is going to be. 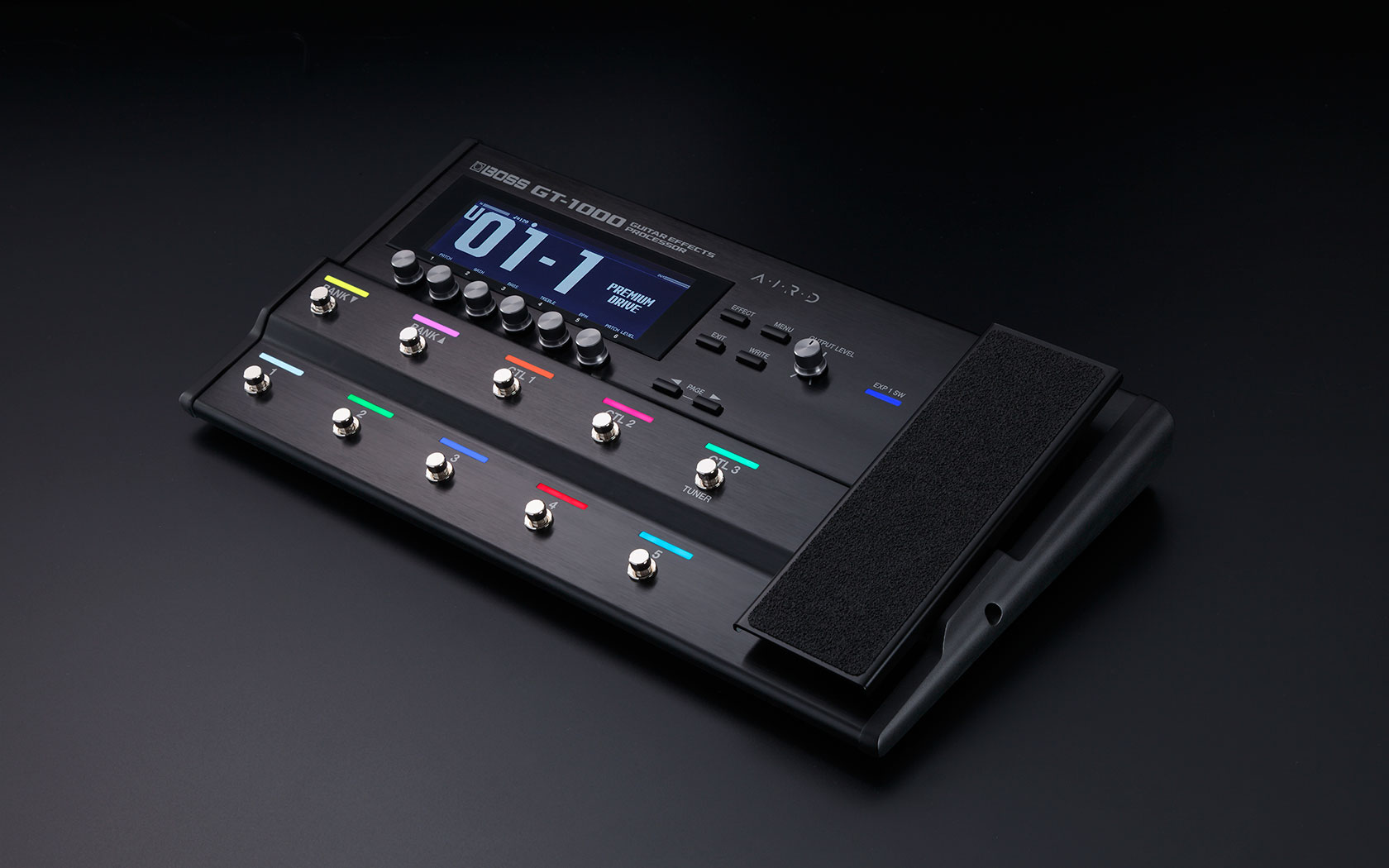 Great amp sounds are obviously not the only thing the GT-1000 does. It’s a Multi Effect pedal. A Boss Multi Effect Pedal, and they have certainly delivered in that department – 116 different types in fact!

The GT-1000 features tones from the RV/DD/MD 500 Pedal Series, as well as the ground breaking Multi-Dimensional Processing (MDP) technology that allows a level of dynamic response not possible on any other unit.

Now, we know what you may be thinking, all this technology must mean it’s pretty complicated? Well, no actually.

Boss’ brand new STOMPBOX mode allows you save and store individual settings from any effects or amp block and recall them later into any other preset. Making it quicker and easier to build presets based on your favourite, go to sounds. You’ll never have to remember “Just how you dialled it in last time”. Simply, Save it, Name it and use it again and again. And that screen is lovely. 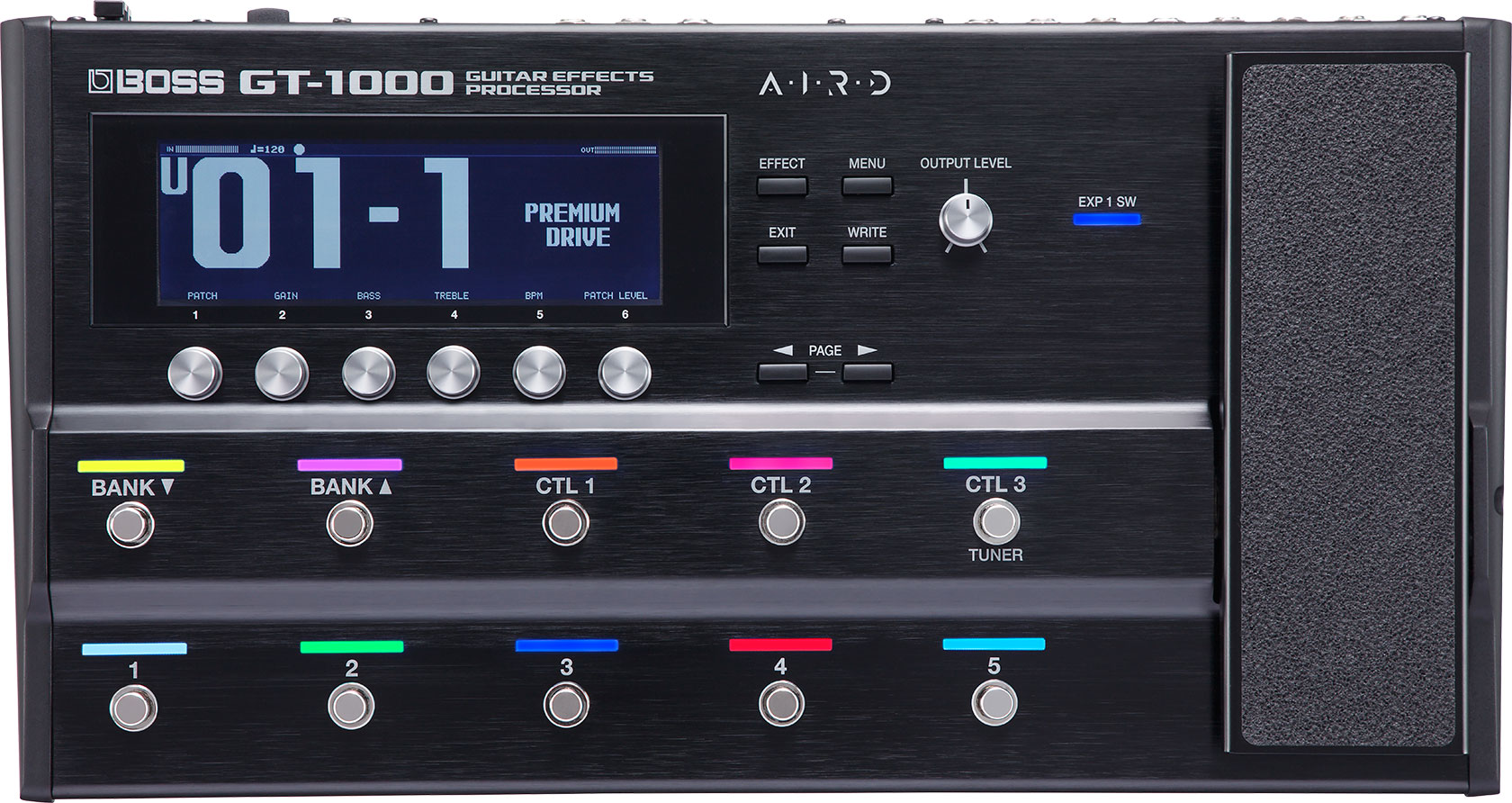 The Boss GT-1000 is specifically built to suit any live rig, and when you see it’s sophisticated AIRD Output Select functionality, you’ll be amazed at the routing options between the numerous outputs Boss has gifted it with.

Not only that, in a first for floor board multi effects, GT-1000 delivers Bluetooth editing as well as a fully featured PC / Mac editor over USB. Using Boss’ onboard looper and Bluetooth allows for an all new VIRTUAL SOUND CHECK where you can simply record your tones, step away from the unit and tweak it just as your audience would hear it.

It also suits the studio too with some extremely useful options over USB. The GT-1000 includes a USB audio/MIDI interface as well, with multi-channel audio operation for flexible computer recording and efficient re-amping. The USB can also be used to edit and organise sounds with the desktop version of the BOSS Tone Studio editor, available for Mac and Windows.

So, if you’re on the market for a new Multi Effects pedal, we strongly suggest you have a good look at the Boss GT-1000, as it looks to be another one of their smash hits.

If you would like to know more about the Boss GT-1000, or any other Roland or Boss release at NAMM 2018, please get in contact with out Roland/Boss/V-Moda Product Specialist, James Purvis.