The History Of Ormsby Guitars

Perry Ormsby started his working life as a carpenter, however fine woodworking was what he gravitated towards. He transferred across to a cabinet making apprenticeship and finished his time achieving the highest marks recorded within his state’s history. An apprentice of the year nomination was offered, but the competition wasn’t for him. He just wanted to make ‘stuff’.

A period of several years as a designer saw Perry get bored and uninterested, even if the money was more attractive and the workspace a bit cleaner, compared to being back ‘on the bench’. Guitars were his passion. If he wasn’t practising riffs and scales, he’d be sitting there staring at a guitar, trying to work out just how they work.

Perry bored his work colleagues to tears with his constant claims that one day, he’ll make a guitar. It would be amazing, he told them. One day, Perry made a new years resolution to build his first guitar. It had to show off his skills as a woodworker, something a bit ‘more’ than a Les Paul or a Strat. It would have a carved single piece Quilt Maple body, and a carved back. The neck would be laminated, and deep set in. The fretboard would be inlaid with gold and silver Mother of Pearl. He’d bind the ebony fingerboard, and continue the inlay onto the headstock. In Perry’s own words ‘making that guitar was the best thing I could have done. It was life changing. I no longer looked at how I could succeed in life financially… I quit my job, and sold my house. 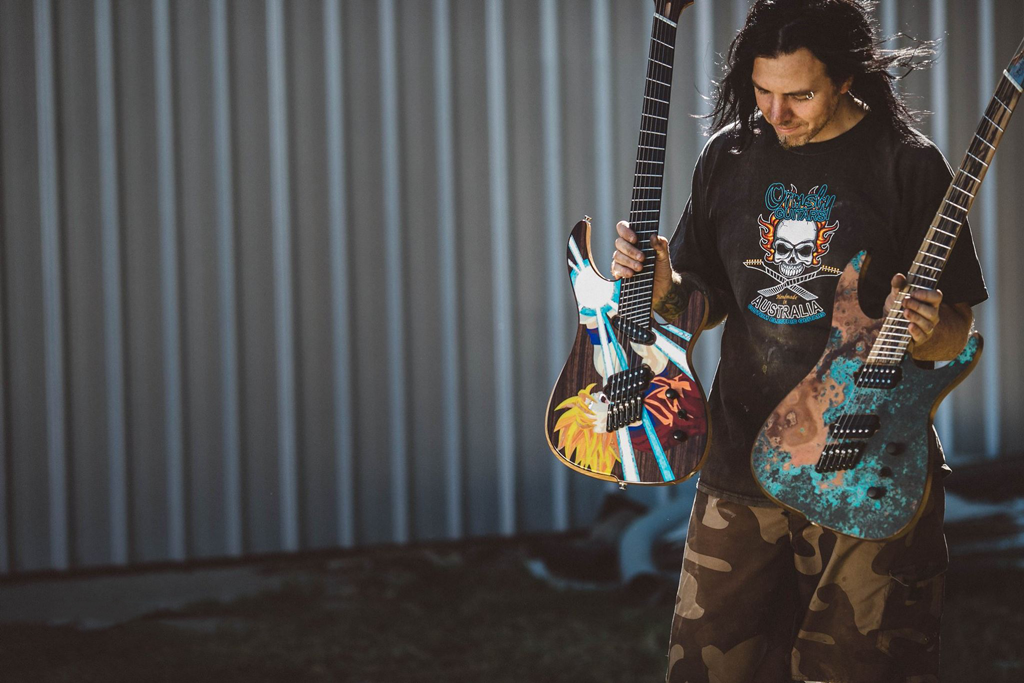 Before long, as people began to learn of his first guitar, Perry had clients signed up for their own instruments. It was easier than they said it would be; “they” being other luthiers he’d chatted to. “You can’t make a living doing this, it’s impossible” was the general cry. Perry didn’t care.

Within 18 months of Perry starting out full time, his waiting list had grown to two years. Within a few years, he’d been offered design roles, and later on, master luthier positions with some well-known manufacturers. That lack of freedom didn’t interest him.

Perry went on to design a new multiscale system that has now become incredibly popular worldwide, here’s an explanation from Perry about the multiscale system in his own words. ‘The whole Multiscale guitar design came about after talking with guitarists who were looking for the ultimate in tone. I’d built some baritones, but tuned as regular guitars. The tone was huge. There was a downside though; the extended scale length meant that soloing was more difficult.   One thing that always fascinated me, was the fact that most musical instruments (drums, pipe organs, pianos, horns, etc) all used a large ‘object’ for the lower notes. A piano string is considerably longer for the lower notes, than those used for the higher pitches. A kick drum is physically larger than a snare, and the same goes for cymbals, etc. From there, I started designing. Knowing how even the best guitars are still out of tune with themselves, I worked out which frets to move, or ‘misplace’ to increase accuracy.

I studied guitarists and how they move on stage, to develop the best angles for the nut and bridge. I calculated the best position for the ‘straight’ fret, based on how most guitarist play when sitting or standing. It was coming together pretty well, and I was proud of what I’d discovered. Once the design was finalised, I started showing people. No one understood it. For years I explained the theory, but no one was interested. Then one day, someone said “oh, they look like they are fanned frets”, which sent me on a discovery of the new term. I found an instrument maker in the USA, who was making ‘fanned fret’ guitars, although he wasn’t angling the bridge, nor the pickups. I continued with designing the Multiscale, it would need specific hardware, the headstock had to be angled differently, the pickups needed to be custom built, and a whole bunch of other little bits and pieces.

I started looking at how a guitar could be adapted to suit. In the beginning, it was two totally different scale lengths, the E/A/D strings had one, and the G/B/E had another. However, this would be impossible to play. Then one day it hit me, if I used the centreline of the neck as the basis of a scale length, and made the frets splay out in a fanned direction, it could work. That night, I discovered an instrument called an opharion. It was perfect. Exactly what I’d imagined.

The whole thing got put on the back burner for a few years until I found a client brave enough to want to try it out. Once we signed off on the design, it all happened very quickly, about 15 days in fact. It was amazing. So natural to play. The tone was unbelievable. The sustain! I was absolutely thrilled to pieces with how it played.’

The Ormsby GTR production range is their first production made multiscale and standard scale instrument range based on their famous custom shop designs, like the HypeMachine, SX, TX, and Goliath.