You’ve probably heard of artists like Justin Bieber, Charlie Puth, Shawn Mendes and 5 Seconds of Summer, and you probably know that between them they’ve amassed billions of streams on Spotify. But did you know that they all got discovered by performing covers on YouTube all made from the comfort of their own home? Or maybe you’re a fan of YouTube musicians like Andrew Huang or Jared Dines, or you fancy making your own tech reviews like Unbox Therapy?

If so then this article might be for you. If you want to get started making high-quality videos to put on YouTube, where do you begin?

Nowadays, if you are a great performer its never been easier (or cheaper) for you to film your performance and put it online for the whole world to see, just grab your smartphone, angle the camera correctly and hit record. But whatever you want your video to be about, if you’re going to stand out against the crowd, you need to make sure that your video sounds as good as it can.

Why does audio quality matter on a YouTube video?

If you’re new to making videos, it’s easy to forget that sound quality matters. We’re all constantly recording short videos that we share on social media using our smartphones with our friends, and these clips seem to sound ok. But take that video and play it alongside a similar video on YouTube that’s racked up hundreds of thousands of views and the difference in sound quality will be huge.

This is because whilst cameras get better year after year, the microphones on them don’t. They’re simply not designed to capture high-quality audio. Your performance might sound great in the room to you, but to your audience, it probably won’t sadly.

What’s more is that microphones in cameras are not directional, which means they pick up all the sounds happening in the room. For instance, if you’re making a video of you having a conversation in a big open room, you will pick up a lot of ambient room sound in the background, and your voice will get lost a little bit. And if you imagine that a lot of people will be watching your video on their smartphone with its small speakers, this is going to lead to a pretty poor viewer experience.

Using a directional mic for your voice, or being able to capture the sound of your instrument directly, will make your performance sound infinitely better. And if you combine this with great footage, and crucially, a killer performance, then you’re well on your way to creating a viral hit.

Isn’t this quite difficult to achieve? Don’t I need expensive cameras and other equipment?

While it is true that a lot of people making professional videos use pretty expensive camera’s and audio equipment, it does not mean that it’s the only way to do it!! If you’re on a tight budget, you can still make excellent videos.

If you’ve got a smartphone with a half-decent camera, then you’ve already got the video side of things sorted. Smartphone cameras are fantastic nowadays, so anything you record is going to look great. The only trouble is they’re not so good on recording sound.

Normally, professionals would record the sound separately on a portable recorder, then load the files into their computer and sync them with the footage. This can be quite fiddly and time-consuming, and not so great if you want to make videos quickly and easily. But thankfully there is a solution. 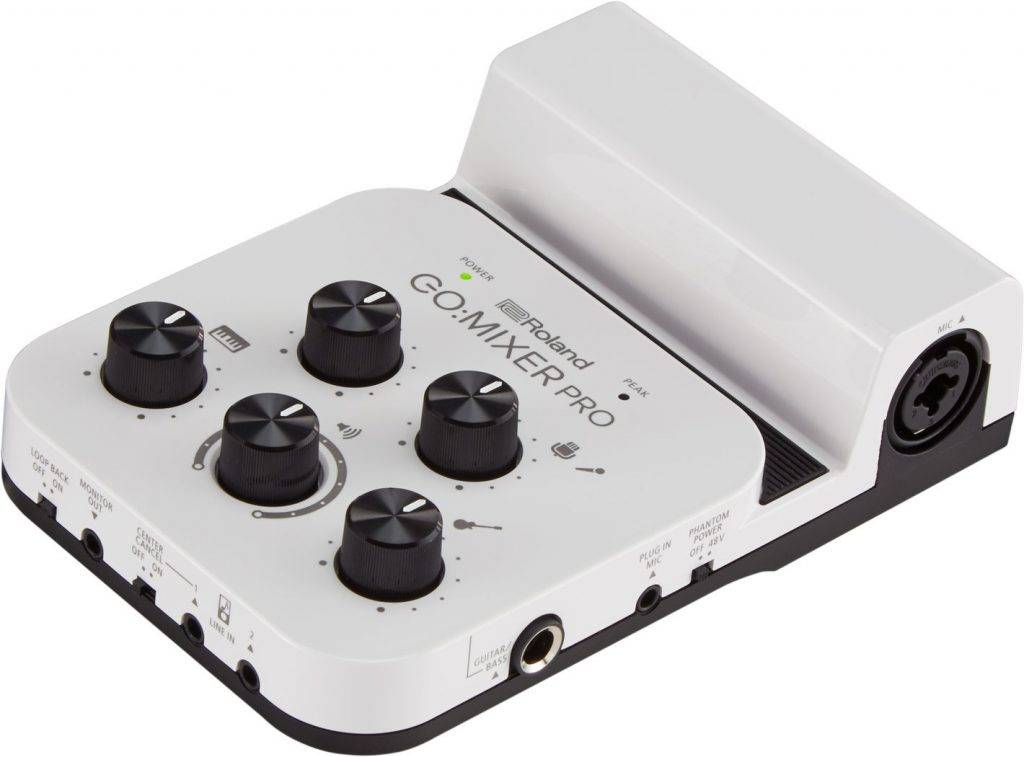 Roland makes a fantastic product called the Go:Mixer Pro. In basic terms, the Go:Mixer Pro is a little box that connects to your smartphone charging socket with a lightening/USB cable, and allows you to connect various bits of high-quality audio equipment like microphones, guitars, keyboards, etc and blend the different levels. When using the Go:Mixer Pro, the sound from your microphone and guitar is recorded directly onto the video on your smartphone. This means that you don’t need to spend any time editing or syncing the sound after your performance; the high-quality sound is already captured. You can load your finished video directly up to YouTube without any further hassle.

A nice little bonus feature is that the Go:Mixer Pro has a great dock that allows you to keep your smartphone stood up and stable the entire time. Meaning you don’t need to spend extra money on additional tripod stands and clamps.

How big is the sound difference?

Check out our comparison video below of a performance made using the Go:Mixer Pro vs one made with the in-built smartphone mic and decide for yourself!

What can I connect to the Go:Mixer Pro?

The Go:Mixer Pro has a number of useful inputs for a wide range of applications:

One of these inputs also features center cancel which can help to reduce the volume of a vocal in a song. This is handy if you are performing along to a backing track that already has a vocal recorded on it.

All of the inputs can be used at once, so if you want to record a performance of a lot of equipment you can just plugin, set the recording levels and go!

How do I connect to my phone?

The Go:Mixer Pro can be used with iOS and Android devices and includes three short cables to connect.

Once you have OTG enabled on your Android device, you can use the included Micro USB to Micro USB cable (or the Micro USB to USB-C Cable) to connect to the Go:Mixer Pro

On iOS devices, there is an additional App for creative video making. 4X Camera is a free app (available on the App store) that allows you to record up to 4 layers on the same video using the LoopBack feature.

For instance, you could record a video of you playing the drums. You could then load this video up in the 4X Camera App, engage the loopback feature on the Go:Mixer Pro (which allows you to record over a pre-recorded signal), then record yourself playing a bass part over the top of the drum part. You can then record a guitar part, and finally a vocal part in the same way. The finished product would be a video split into 4, with you as the sole performer playing a complete song!

The Go:Mixer Pro is the perfect way to get great audio into your smartphone without spending a fortune, and will put you well on the way to making great quality videos.

Don’t need as many connections? Roland also makes a simpler model called Go:Mixer, which features a similar set of inputs, but doesn’t offer an XLR input (and no phantom power), and also comes without the lavaliere input.

Not sure what other gear you might need to get started?

Check out our great bundles giving you all the items you need to get started straight away. We’ve included a great choice of microphones, stands, cables and headphones to help you find the right thing for your needs.