As a performer, you understand that your microphone is the first device in the signal chain; anything that happens from that point will directly affect the final show, production, event or meeting. As you are responsible for ensuring the audio remains uncompromised, you know the importance of retaining access to clean, high-quality RF Spectrum.

We now live in a connected world, where consumers expect instant connectivity across a multitude of devices. Mobile phones, tablets, etc are known as whitespace devices, and the connections these devices provide will directly effect our wireless transmissions. The power and convenience that brings to our daily lives is undoubtedly important, but it also means the RF spectrum has never been in such widespread use by the general public.

FREQUENCIES YOU CAN USE FOR WIRELESS MICROPHONES & IEM’S

Wireless microphones and in-ear monitors operate in dedicated blocks of spectrum. In the UK, the majority of systems operate in the so-called UHF bands but there are a few other parts of the spectrum that are available for wireless systems.

Which frequency version should I purchase? The primary UK frequency version is K3E. This version covers TV Channel 38. For fixed-site installations, users may choose the K14 version as this operates only in the interleaved spectrum.

What’s the key benefit of choosing 2.4GHz? GLX-D operates within the 2.4GHz band, which is utilised by Wi-Fi, Bluetooth and other wireless devices. The benefit of 2.4GHz is that it’s a global band that can be used anywhere in the world, licence-free.

The next level in GLX-D digital audio clarity. The rack mount receiver and frequency manager system features intelligent rechargeability and seamless operation for a diverse range of applications. 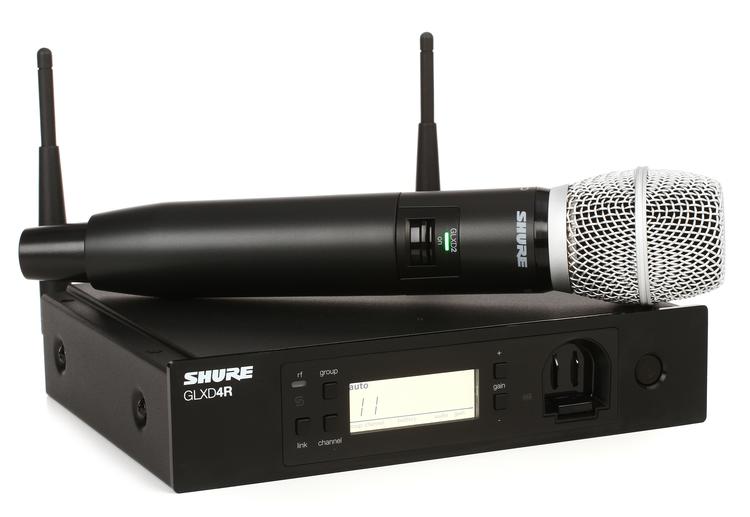 How many systems can I use together? Link up to nine GLXD4R receivers in typical application environments (up to 11 under optimal conditions). Two GLX-D Frequency Managers required for communities of more than six receivers.

What frequency version should I purchase? We suggest K3E as this is the primary UK version that covers Channel 38. Note that a licence is required to operate wireless microphones in Channel 38.

Digital wireless systems are increasingly common in the world of professional and semi professional audio. Their growth over the last few years is the result of many factors, from the continual pursuit of better quality sound to the increasingly pressing issue of RF spectrum clearance. Like other areas of the audio world, though, the debate as to whether digital is better than analogue, or vice-versa continues to spark much debate, causing a plethora of misconceptions, and/or questions. To help settle the debate, at least for a while, Shure Applications Engineer, Tom Colman has kindly answered some of the most common questions we receive about digital wireless systems.

HOW DOES THE AUDIO COMPARE? IS IT TRUE THAT DIGITAL WIRELESS DOESN’T SOUND AS GOOD AS ANALOGUE?

The age-old analogue vs digital question is always laced with subjectivity. For wireless mics though, it’s more objective. On the whole, digital radio microphones will have more low-end, top-end and argubly sound more transparent than analogue. This is due to a couple of reasons. Analogue systsems are bound by the limitations of FM modulation, such as limited frequency response. The lack of top-end is particularly noticeable on bodypacks used for instruments with lots of high-frequency content. The frequency response of our digital systems is 20Hz – 20KHz, which results in very full sound.

The other thing is, digital systems are not subject to noise picked up while being transmitted. In a digital transmitter, the first process applied to the incoming audio is the analogue-to-digital conversion. Now that the audio is represented in 0’s and 1’s, the transmitter will use what is typically a proprietary form of digital modulation to send this data. As the data being transmitted is digital, the receiver can perfectly recover the digital 0’s and 1’s, thus resulting in a perfect reconstruction of the original analogue sound – as well as avoiding pick up noise. The process also allows the frequency response to be much wider than analogue as we are no longer bound by the limitations of FM modulation.

HOW MANY SYSTEMS CAN YOU USE TOGETHER?

The amount of systems you can run at any given time depends on the system you’re using and the spectrum it operates in. To give you an exmaple, a Shure GLX-D system allows you to use up to 8 systems together, but this requires the 2.4GHz spectrum to be super clean. In normal circumstances, I would recommend using up to 4 systems together. If you need to regularly use more at once, then I’d (carefully) recommend using BLX or GLX-D Advanced, or making the jump to QLX-D.

Higher-end UHF systems (such as ULX-D and Axient Digital) are only really limited by spectrum availability and the RF coordinators experience. Both systems offer a High-Density mode, which can significantly increase channel count under the right conditions.

WHAT’S THE RANGE ON DIGITAL WIRELESS? IS IT LESS THAN ANALOGUE?

The digital UHF systems have a similar range to other analogue UHF wireless microphone systems. There’s no difference in carrier frequency; the only difference is it’s carrying digital information rather than analogue. Systems operating in the 2.4GHz band use a higher frequency to transmit audio and so will have a lower, smaller operating range. Physics is physics.