If you’re producing music at home or in the studio, one of the most important pieces of gear in your setup is an Audio Interface. To put it simply, an audio interface allows you to get sound both into and out of your computer. However with so many interfaces on the market, choosing the one that is right for you can be a very daunting task. To help you along with that important decision, we’ve put together a list of our five favourite interfaces available on the market today. 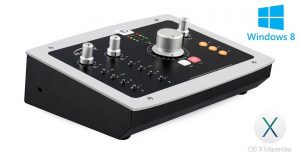 No stranger to the world of audio, Audient have been providing top quality consoles and pre-amps for years, however their foray into the world of interfaces is something new.

The iD22 does not however disappoint, delivering a high-quality interface with two of their legendary pre-amps built-in, as well as two inputs and an instrument input. The microphone channels feature switchable +48V phantom power, input pad, high-pass filter and polarity invert switch. The input channels also feature send and return jacks for patching in your outboard should you want to processor the signal before reaching the interface.

The interface also benefits from a very sturdy and well-constructed build. The knobs have enough weight and resistance to them to make sure that you don’t accidentally switch inputs whilst recording.

If you’re looking for a great entry level interface that will allow you to record one or two sources at a time and allow you to take control of your monitors in the process, then the Audient iD22 is definitely the one for you. 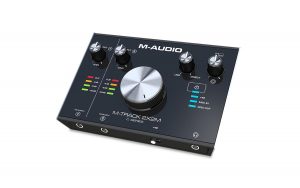 The 2x2m is the latest addition to M-audios audio interface range. Featuring the brand new USB Type-C connector, these are the perfect interfaces to use with the new Macbook range. Don’t worry if you’re not using a computer with USB Type-C connectivity as there is backwards compatibility available.

The interface features two input channels of flawless 24-bit/192kHz digital audio conversion. There is almost zero-latency which lets you hear yourself in real time as you record without any distracting delay. A single XLR-1/4″ combo input on Channel 1 for microphones and line-level sources, Channel 2 features a 1/4″ instrument input (the 2x2m model allows you to use two mic inputs simultaneously.) You’ll also find the brand new Crystal preamp’s which provide a very smooth low end and a nice gentle boost in the 7-8kHz range.

The 2×2 comes bundled with Steinberg’s Cubase LE software and also 20 mixing plug-ins from the AIR Creative team. All the software and hardware is compatible with both OSX and Windows and is very easy to set up.

The design is very clean, with a sleek metal chassis build. There’s also a large machined aluminium central volume knob which is the most prominent feature of the interface. 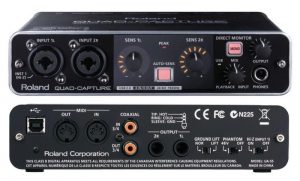 If you’re a fan of Roland and are looking to try out their Audio Interface range, the Quad Capture could be the perfect entry level interface for you. A 4 in 4 out interface, it comes equipped with two mic/ line preamps, two balanced line outputs with quarter-inch TRS sockets and Midi I/O and S/PDIF I/O at up to 96 kHz on RCA sockets.

The unit is USB powered, usually this would create a lot of noise, however Roland’s own ‘low noise’ power supply makes sure this is not an issue.

One of the key features that makes this interface stand out is the Auto-Sens function. Auto-Sens sets the preamp gain to the optimum level while auditioning your playing. It’s as simple as plugging in your guitar or mic, playing/singing your loudest part and the preamp will set the gain automatically. No more wasting time, messing about testing the gain at different levels.

Build wise, the Quad Capture is a very sold unit. The knobs on the front and the back of the unit have a very smooth feel to them. The XLR’s are retained by allen bolts. Also as the pre-amps on the interface are digitally controller you won’t have to worry about noise from the pots when using the unit.

The Quad-Capture has features well beyond its price tag, most of the feature’s found on the Octa-Capture can be found in this fantastic model at a fraction of the price. 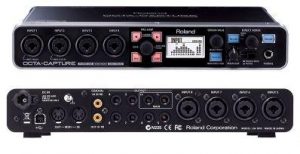 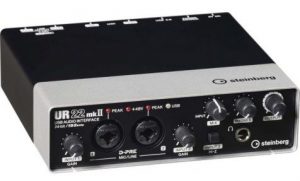 A two-in, two-out bus powered USB interface from Steinberg, the UR22 is the perfect entry level Audio Interface for fans of the brand. Inside the unit you will find the same Yamaha D-Pre preamps that can be found in the more expensive UR/MR series models. This combined with sample rates of up to 192kHz makes for a unit with great sound quality.

Bundled with the interface, you’ll find a copy of the industry standard DAW, Cubase. If you’re looking for a great piece of software to use when recording with this interface, then the integration between this software and hardware could be perfect for you.

The UR22 is housed in a very sturdy black and silver metal case. With robust controls, a flush mounted toggle switch and stiff potentiometers, the UR22 is definitely built to last.

If you’re looking for an interface that is compact and provides good-quality audio, you will not be disappointed by the UR22. Its rugged build and low noise are big advantages at this price, and the ability to record at 24-bit resolution will appeal to anyone in the market for an interface to use whilst on the road. 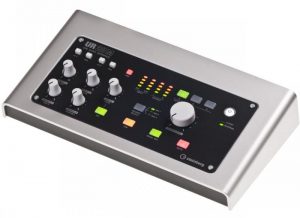 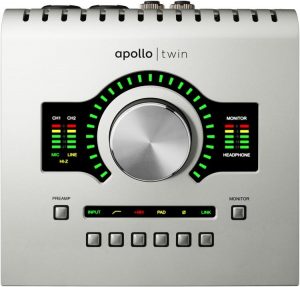 Universal Audio have been at the forefront of audio recording innovation for the last 50 years and with their new Apollo range they go even further to enhance their reputation as pioneers. The smallest model in the Apollo range, the Apollo twin is available with either Thunderbolt or USB connectivity (to cater for both Mac and Windows users.)

What really makes this interface stand out though is its built-in UAD Processor, which enables you to run UA’s DSP-powered plugins. The Realtime Analog Classics collection (bundled with the interface) can be used during recording or monitoring, but the clever Unison feature also allows certain UAD preamp plugins (such as the bundled UA 610 emulation) to be used during tracking, simultaneously adjusting the input impedance and gain staging response of the digitally controlled analogue preamps. Overall, the DSP options adds a huge amount of features to the recording process, from the very moment you start recording all the way through to the final mix down.

Not only does the Apollo Twin sound great, it also looks fantastic with an elegant brushed-aluminum casing.

Although not the cheapest option on the market, you will be hard pressed to find an interface with the same features at such an amazing price. If you’re looking to record more than two instruments at the same time, there’s also eight and sixteen channel models available. 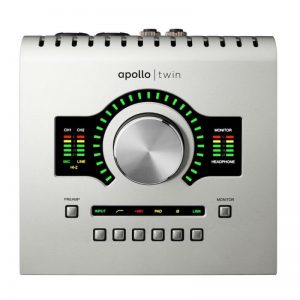