The Shure MV88 MOTIV Digital Microphone is a Stereo Condenser Mic designed to capture high-quality audio using your iPhone, iPod Touch or iPad with Lightning Connection. Simply connect your Shure MV88 Microphone directly to your Apple device to record great audio on-the-go. For flexibility, the MV88 MOTIV features a 90-degree hinge with built-in rotation to allow the mid-side microphone to change position for your convenience.

Now, you’re likely wondering at this point what the main differences between the MV88 and MV88+ are. We’ll gladly break it all down for you right here.

One key aspect to consider is headphone monitoring. When the MV88 was designed, Apple had not yet removed the 3.5mm jack from the iPhone. In many cases – like recording your daughter’s violin performance or saving some vox pop for a podcast – this isn’t an issue. However, there are plenty of users wanting to monitor their recording in real-time and the MV88+, with its own dedicated headphone output, allows them to do just that.

When the MV88 was first conceived in the Shure labs, there was also no such thing as the Periscope app or Facebook Live, so it will not work while live streaming video. The new MV88+ has been designed with that added functionality in mind, so it will be the obvious choice if you are someone who does such content.

The original MV88 is an extremely versatile tool that can be used for various forms of video and audio capture. However, you can only connect the mic to your iPhone or iPad in one way – via the Lightning port. This occasionally poses an issue for some smartphone mounts for filming video. So SHURE purposely designed the MV88+ to have the mounting flexibility to fit any rig. You can choose from five (and counting!) different setups.

In addition to the above options, let’s not forget you can also mount your MV88+ into one of your own tripods or stands, as long as it has a standard quarter-inch connector. 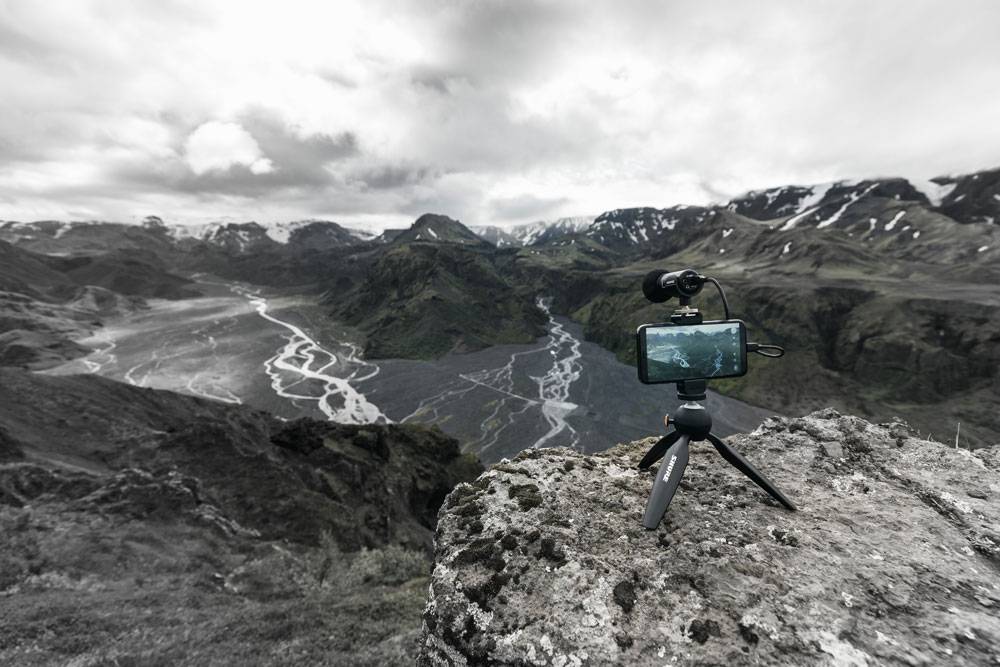 Another great feature of the new MV88+ is that iOS users can charge their phones while recording with a USB3 camera adapter. That way you’ll never have to worry about battery life during a longer session. No more putting off filming your vlog when your iPhone runs out of juice!

While the audio you can capture with the MV88 is still something to marvel about, SHURE have learned a few things over the last three years and have improved the performance of the MV88+.

Of course, its not only iOS users appreciate great audio. Fortunately, the MV88+ also offers compatibility with a growing number of Android devices. Please visit Shure.com/MOTIVCompatibility to find out which smartphones we know will work with our new microphone. I can tell you now that Samsung Galaxy S8 and S9 owners will be very happy.

The MV88+ Video Kit is undoubtedly a powerful package for all sorts of content creators. But the original MV88 still has some real advantages that make it the better choice for many users.

First off, the MV88 currently costs around £75 less than the MV88+ model. So, if price is a concern and you don’t need the extra functionality of the kit, you might want to consider the MV88 instead. Also, if you’re more interested in sound applications than video, the original mic is likely all you’re going to need to capture profession-quality audio.

There is also no beating its set-up time – because there is none! Sometimes you want to record something instantly and any delay might mean you miss the moment. The MV88 can fit into your pocket and be ready to go in a matter of seconds. Or even keep your iPhone locked and loaded with the mic already in the Lightning port. If you know there will be occasions where being ready to record is a necessity, the original MV88 will not let you down.

Click here to see more from SHURE and what products they have available.