In addition to emphasizing the same real analog sound and joy of controlling an electronic musical instrument offered by the original minilogue, the minilogue xd newly adds a digital multi-engine, effects, a powered-up sequencer, and micro tuning functionality, further expanding the possibilities for sound design and performance potential. The minilogue xd is a fitting addition to the original groundbreaking minilogue.

A semi-modular analog synthesizer that makes modular synthesis more accessible and understandable than ever before. Creating new sounds that don’t exist in the outside world is an unending dream which has continued since the birth of electronic musical instruments. This dream has evolved and expanded throughout the development of new and unique music production devices. 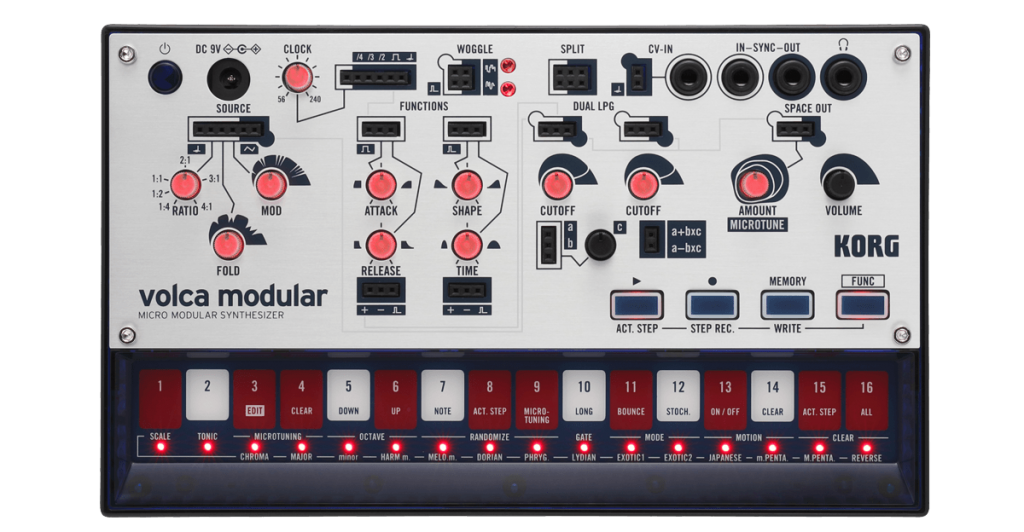 The popularity of modular synthesizers around the world has generated new excitement and interest in the so-called “West Coast style” of synthesis that deviates from traditional synthesis norms.

The compact body of this volca synth features eight modules and 50 patch points. While learning the basics of a modular synth, you can use popular features of the volca synthesizer line to control a unique and different flavor of analog sounds.

Welcome to an infinitely expanding world of sound-design.  Joining volca kick and beats as the third, and most unique, drum synth in the volca lineup.

Based on a simple trigger waveform, wave folder and overdrive are used to add overtones and distortion, and then a waveguide resonator effect brings the sound to life. The six-part DSP synth engine was designed with a completely different philosophy than conventional drum machines, and generates a wide range of unexpectedly different sounds. And of course, you can play those sounds from the volca-style sequencer. 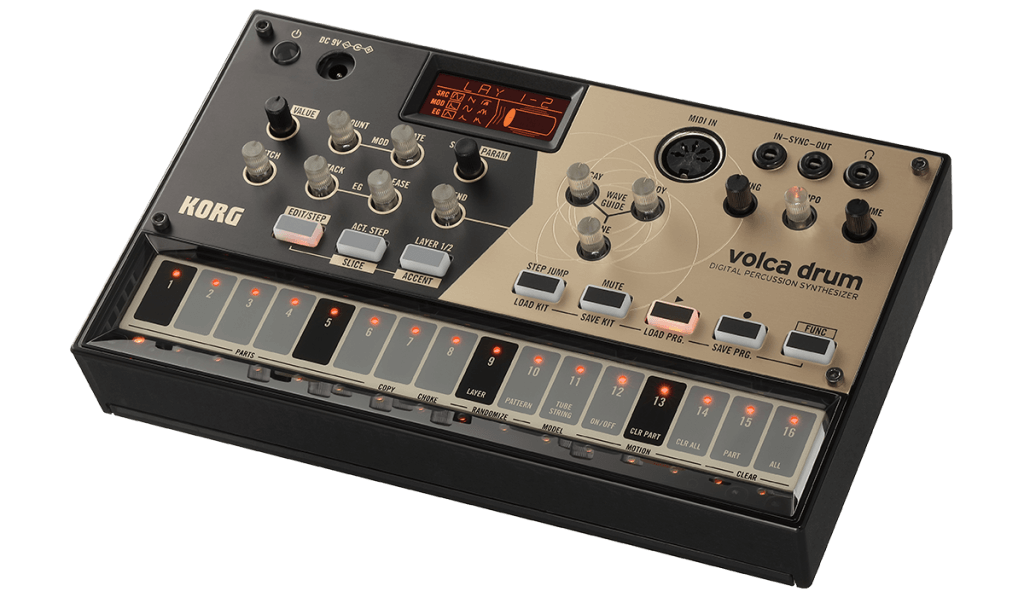 Adding these distinctive sounds to your rhythms will revolutionarily transform your performances and productions.

Digital percussion synth with a 6-part x 2-layer structure The term “digital” typically brings to mind sounds that are based on PCM-sampled bass drum, snare drum, or cymbal, but the volca drum creates its drum sounds by DSP-powered analog modelling. Oscillator waveforms such as sine wave, sawtooth wave, and noise are provided. By applying various changes to these waveforms, you can create a wide variety of percussion sounds that range from realistic to idiosyncratic, and are not limited only to drums.

The six parts each have two layers, and do not impose any rules or restrictions such as specifying which parts must be used for the bass drum or for the cymbal; all parts have the same specifications. You can freely assign your new sounds to these six parts without being limited by the conventions of a drum set. A kit consists of the six parts that you’ve assigned plus the waveguide resonator effect settings, and 16 such kits can be stored in memory (the factory settings contain 10 preload kits).

KROME, the best-selling synth focused on packing the most usable sounds into an easy to use platform, has received a major refresh. Updated to meet the needs of the current music scene, KROME EX has a special emphasis on sounds that can immediately fit into productions of all types.

In addition to standard sounds that will never grow old, KROME EX provides numerous new programs and PCM data, including piano programs prepared specifically for this product. This instrument provides high-quality and immediately-usable sounds that take full advantage of the KROME’s high performance specs. The new body also features a newly revamped build and look to accompany the new sounds.

ROME EX 61 and 73 models feature a semi-weighted keyboard; with great feel and response that are ideal for playing any style of piano, to dynamic organ performance, to pyrotechnic synthesizer solos. KROME EX 88 is equipped with KORG’s NH (Natural Weighted Hammer Action) keyboard, ensuring that every nuance of your playing dynamics will be expressively reflected when playing sounds such as piano or electric piano.

With a red gradation finish that makes it identifiable at a glance, this KORG KRONOS features the new Italian-made grand piano that debuted on the KORG Grandstage. It also comes with the pre-installed “KApro Showcase” that collects only carefully selected sounds from KApro (*), who provided more than 100 of the KRONOS Sound Libraries. The gorgeous colour and sound delivered only by KRONOS will make an unmistakable difference on stage. The KRONOS Special Edition is available in a lineup of three models: 61-key, 73-key, and 88-key.

Italian Piano In recent years, this Italian grand has drawn dramatically increased attention from the worlds of classical and jazz music. The presence of its sound and its detailed resonances have captivated audiences worldwide. A full concert grand previously used in international competitions was specially adjusted and sampled for the KRONOS.

KApro Showcase This includes orchestral strings that sing with emotion, as well as brass, woodwinds, choir, and phrases. It’s a showcase of sounds from KApro, who has developed more than 100 titles of Korg sound libraries. This collection will be a gateway for you to further expand your sonic variety.

KROSS 2, the long-awaited successor of the KROSS, is a compact, portable workstation with a huge range of sounds. While maintaining its identity as ultra-lightweight, compact, and capable of running on batteries, this new model dramatically enhances KROSS’s sounds and functionality. In addition to a total of more than a thousand preset sounds, expansion PCM memory has been newly added. Also new is a pad sampler that allows full-fledged sampling, and USB audio/MIDI interface functionality. The colour scheme is even more stylish, and the user interface allows intuitive operation even by beginners.

Effortlessly select the sound that you want to play, shape it to match your imagination, sample a sound, create phrases and rhythms, record your vocal or guitar, bring KROSS 2 on stage, and perform. Whatever you artistic vision, you can make it happen. KROSS 2 is a versatile synthesizer platform made with creative freedom in mind.

The sound quality of KORG synthesizers is endorsed by top-ranking musicians around the world. The evolved KROSS 2 expands polyphony from 80 to 120 voices, and dramatically powers-up the number of internal programs from 809 to 1,075 programs. Including multi-layered pianos and electric pianos, thick strings and other new sounds that will work well with any band, as well as the latest drum kits to cover current styles such as EDM. The wide selection of programs covers your needs from live performance to studio production.